PORTLAND, Ore., January 21, 2020 – Portland, Oregon has come, and grown, a long way in the last 10 years. From the depths of a deep recession to a booming economy.

Along the way, the region has also been showered with accolades such as best economy, best place to start a business, best food city, best commuting city, best airport, and the list goes on. 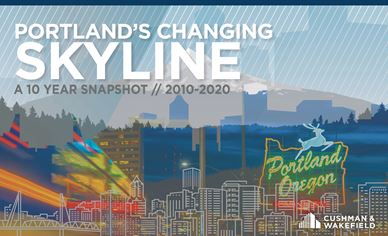 For these reasons and many more, the Portland metro area is widely revered as a great place to live, work and play.

Cushman & Wakefield is pleased to announce the firm’s local research and brokerage experts have joined forces to publish a brand new report/infographic, entitled Portland's Changing Skyline, covering the booming development trends and impact of Portland’s commercial real estate sector over the past decade.

“Everywhere you look it seems there is something new and exciting happening, whether a new project, a new restaurant, another tech startup, or simply a new neighbor,” said Samuel Hatcher, Research Analyst at Cushman & Wakefield’s Portland office. “Whole new areas of town have been radically transformed over the last decade such as Slabtown, North Williams, Division Street, and the Close-In Eastside.”

The statistics show just how dramatic that growth has been. The population of the Portland metro area has grown by over 275,000 people, up 12.4% between January 2010 and December 2019. Meanwhile, 239,000 new jobs have also been created, an increase of 24.4%. The area has gotten wealthier with median income of $79,761 up 46.3% during this same time, representing one of the largest increases of any major metro area in the US.

The popular sketch comedy TV show Portlandia dubbed Portland “the place where young people go to retire.” But in reality, it is actually where many young people move not only for the hipster vibe but also for innovative and creative jobs, affordable living and an active, outdoor-focused lifestyle. As a state, Oregon saw the 6th fastest growth in the nation for the prime 25 to 39-year-old age demographic at 15% growth from 2010 through 2018, according to “Multnomah County Economic Indicators.”

According to LinkedIn, Portland is the 2nd most popular destination for San Francisco transplants, attracted to the Northwest market by its well-paying jobs and comparatively more affordable living. The “Rent-to-Tech Wage Ratio” comparing average apartment rent to the average tech wage, is 17.8% for Portland compared to 26.4% in the San Francisco Bay area, meaning, at least for tech workers, the Portland area is about 50% more affordable than the Bay area.

In total, over 85 million square feet (msf) of new commercial development has been delivered to the market over the last 10 years to meet the areas growing population and changing demographics.

“Using the popular baseball analogy, people used to ask, ‘What inning are we in?’ to gauge how much time was left in this real estate cycle. No one really asks that anymore, as it just keeps going and going,” added Jim Lewis, Senior Director of Capital Markets at Cushman & Wakefield.

But there are shifts taking place in the market. Inclusionary housing and state and local new housing policy has slowed down interest in multi-family development. New office development in the central business district has caused vacancy to increase from 10.2% two years ago to 11.8% as of Q4, 2019. This year for the first time in a long time new industrial supply has outpaced demand and retail, while relatively stable, continues to face pressure from e-commerce.

For now, though, the building boom continues in the Rose City. Lewis explained, “We are a far cry from 2010 when there was a lone crane in the downtown skyline casting shadows over Pioneer Square. That project, Park Avenue West, eventually kicked off construction in 2013 and was completed in 2016. Fast forward to today, there are currently 30 cranes operating just within the City of Portland, not including the surrounding areas. San Francisco by contrast has 23 cranes and New York, 27.”

While development has been broad based among the various property types, there have been some notable trends within property type over the last 10 years.

Office: 8.8 msf of new construction including significant renovations: While there have been some significant additions in the suburbs over the last 10 years such as the Intel and Nike campus expansions, most of the focus in the office market has been downtown and the close-in submarkets. Class A rent in the CBD has increased 45.3% over the last decade while suburban Class A rent grow has been less than half of level at 21.2%. In previous cycles the CBD and suburban markets tended to move in lock step.

Industrial/Flex: 22.8 msf of new construction. The industrial market has been on a tear for several years now with record low vacancy and surging rent, up 30% over the last 10 years. One of the biggest trends during this period has been the growth in size of new warehouses. In Portland, a 250,000 square foot warehouse used to be considered a “big bomber”. Now we regularly see 500,000 and 1,000,000 square feet boxes.

Retail: 6.6 msf of new construction. Despite all the headlines about the demise of retail, the market has seen considerable growth and vacancy remains near historic lows at 3.4%. What we have not seen much of over the last 10 years, and are not likely to see anytime soon, is any major new mall development. New construction has primarily been grocery-anchored shopping centers and large format free-standing stores as retailers continue to expand in the suburbs.

Hotel: 4,066 new rooms. Hotels are second only to multi-family in terms of percentage growth over the last 10 years. The Portland region has seen an over 16% increase in the total number of hotel rooms including the long awaited 600 room Hyatt convention center hotel.

Lewis said, “Indeed, much has changed in the Portland commercial real estate market over the last decade, but that beloved Portland vibe and authenticity remains the same for the most part. And while growth has cooled from the blistering pace of a few years ago, from a real estate standpoint, fundamentals remain excellent and our near-term outlook bright.”

He concluded, “We enter this next decade on much stronger footing than where things stood 10 years ago. We have job growth, population growth and a low interest rate environment. This favorable combination should help continue to propel the Portland market forward.”