Deliberating the Duties: Trade Tariffs and Their Impact on Mainland China’s Office Market

U.S.-China trade relations have continued to intensify. In September 2018, the U.S. announced that it would impose new tariffs on an additional $200 billion worth of Chinese imports, and that it was prepared to tax all Chinese imports. And, there are already $50 billion in Chinese imports subject to higher tariffs.

China responded with its own levies on an additional $60 billion worth of U.S. products, on top of the $50 billion already implemented. As trade tensions continue to heat up, much is at stake.

One of President Trump’s key campaign promises was to challenge trade agreements particularly those with which the U.S. runs a trade deficit. As of August 2018, the U.S. merchandise trade deficit with China stood at a record $38.6 billion.

Tariffs come to the fore

Relying on Section 301 of the Trade Act of 1974, the U.S. proposed tariffs on steel and aluminum imports from China, Canada and countries in the European Union (EU) in March 2018. The U.S. administration articulated that the tariffs were needed to safeguard national security and the intellectual property of U.S. businesses, and to lessen the U.S. trade deficit with China. While these tariffs were levied on China in March, some key U.S. trade partners were initially exempted from those tariffs, including the European Union, Canada and Mexico. However, by June 2018, those exemptions were revoked. 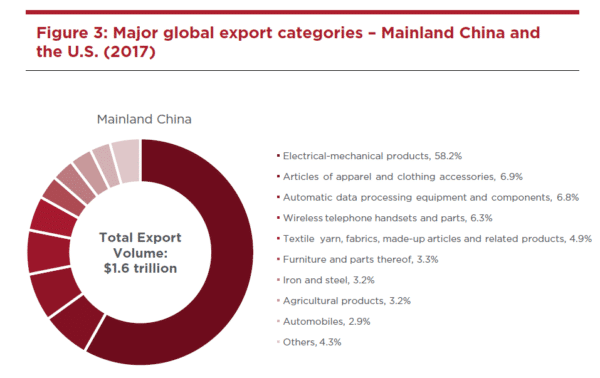 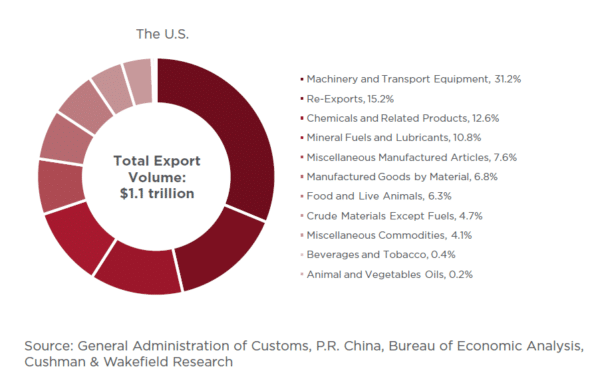 Sound the alarm? Not quite, but caution and consideration needed

In its latest World Economic Outlook report published in July 2018, the International Monetary Fund expected the cost of the building trade tensions to be around $430 billion, or 0.5 percent of world GDP. With the trade dispute landscape having moved on since then, this figure seems conservative now. What’s more, due to the tight integration of global supply chains and financial markets, its economic impact could spread well beyond the two involved parties.

When looked at from both Chinese and U.S. viewpoints, the higher-tariffed goods now represent 3.9 percent and 6 percent of each country’s global exports, respectively – no small percentages for either important center for global trade and business (Figures 3 and 4). 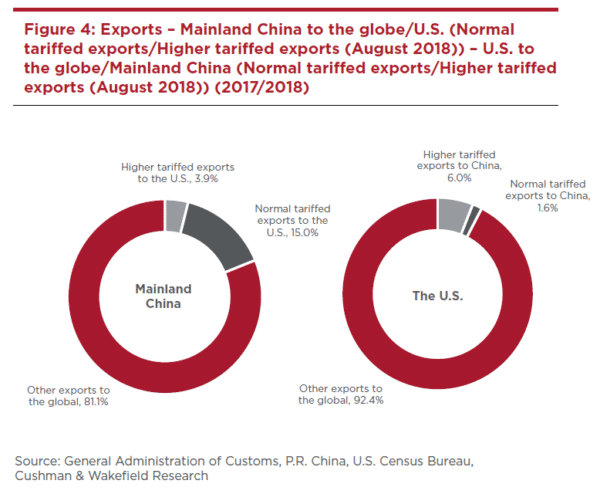 To mitigate the impact of increased tariffs, both Chinese and U.S. companies could: 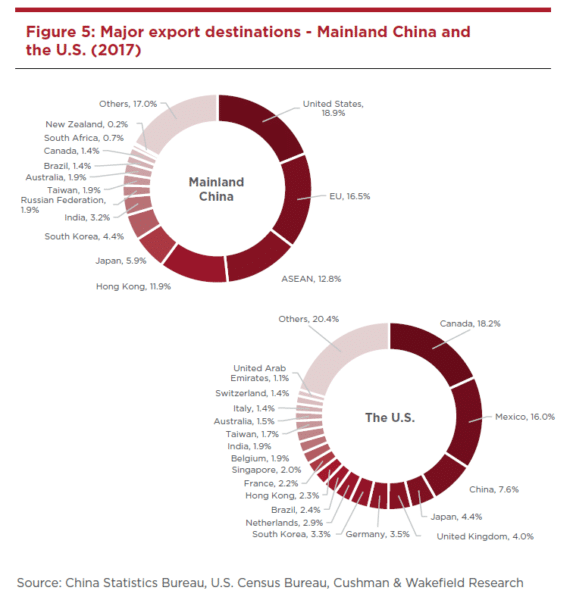 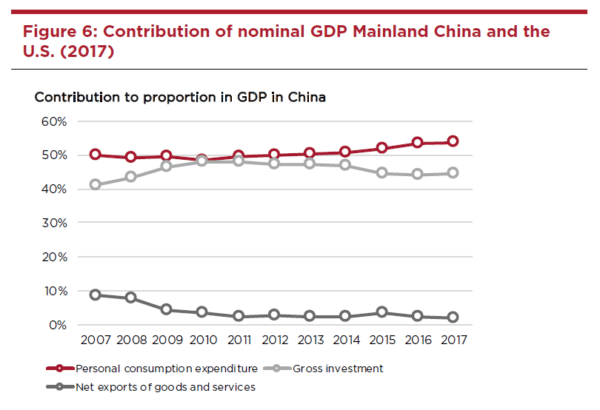 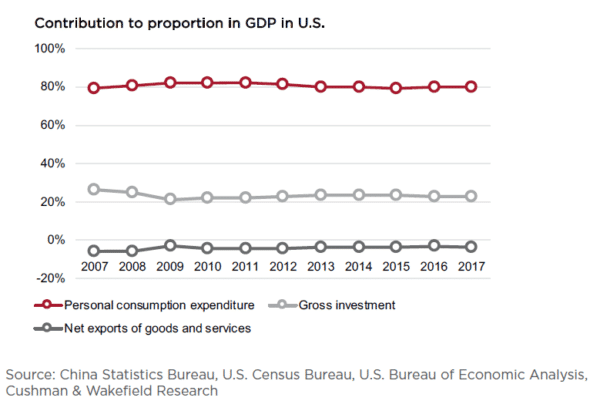 With currently 7.6 percent of its exports going to China, the U.S. is less exposed to tariffs from China. In China’s case, 18.9 percent of its exports are sent to the U.S., making it important for Chinese companies to consider further developing other existing secondary markets or seeking new secondary markets for their exports if the trade dispute deepens and becomes prolonged.

This could be of greater consequence in the future, given duties implemented or proposed by the U.S. now stand at more than 7,000 tariff line items covering $250 billion of imported goods and products from China.

It is possible that some U.S. companies may need to seek or develop other secondary or new markets for their exports as a result of recent escalation in tariffs. However, if the U.S. is tackling a trade conflict on several fronts at that time, it might limit the opportunities for U.S. companies to further develop existing secondary markets.

Current tensions have thrown another source of economic volatility into the mix. Generally, occupiers, developers, investors and owners of real estate are opposed to tariffs as it is expected to increase the cost of doing business. Further, the uncertainty created by the trade dispute makes it difficult to strategically plan. This is of particular concern for U.S. companies currently doing business in China.

In fact, looking at some results from a recent 2018 survey by the American Chamber of Commerce in Shanghai, retaliatory use of trade tariffs was backed by only 8.5 percent of respondents versus 69 percent who were opposed. One concern is that it could impact the profitability of U.S. businesses operating in China. In more detail, 76.5 percent of U.S. companies said they were profitable with 83 percent of manufacturers stating they were making money in Mainland China.

Additionally, in a later Chamber survey in September, more than 50 percent of surveyed U.S. companies doing business in China said the practical impact of combined tariffs would eat into profits. Many companies also suggested this would result in higher production costs and a decrease in demand for their products.

Certainly, both U.S. and Chinese companies doing business in Mainland China would like to avoid a full-blown trade war in the future through greater business transparency and an end to the tit-for-tat dynamic that is unfolding at present. A return to freer trade would undoubtedly cause trade to pick up and office market demand to increase in Mainland China.

The lay of the land

Thus far, despite the trade tensions, China’s office sector is holding up well. At the end of Q3 2018, by far the two largest quality office markets are Beijing and Shanghai at 7.8 million sq m and 6.9 million sq m, respectively. Total premium office net absorption around the country for the third quarter this year was a solid 927,759 sq m. Beijing is now the tightest first-tier city market in the country, with a vacancy of 3.4 percent, while Hangzhou, at 11.4 percent, is currently the second-tier city market with the lowest availability. These figures are low compared to the country average of 21.8 percent at the end of Q3. This tight availability for both cities is reflected in rentals with both Beijing and Hangzhou enjoying the highest market rentals for their respective city categories at RMB 442 per sq m per month and RMB 158 per sq m per month, respectively. The current country average stands at RMB 155 per sq m per month.

A total of 28.6 million sq m of future office supply through to 2022 will place pressure on rentals in several city markets going forward. For occupiers, this will be welcomed as more space options will become available at more favorable rental rates. With the supply coming online along with the trade disputes creating additional uncertainty, occupiers may have a window of opportunity to capitalize and sign deals for more favorable terms. When considering the amount of new supply through to 2022 as a percentage of current stock, the first-tier city market, which will see the largest relative increase in new supply, will be Shenzhen at 156.7 percent. For the second-tier city category, it will be Xiamen at 137.6 percent. On the other hand, first- and second-tier markets, which are expected to receive comparatively less supply over the next five years, are Beijing and Hangzhou at 19.1 percent and 30.1 percent, respectively.

Office market dynamics give occupiers, developers, investors and owners much to consider without factoring the impact of trade tensions.

As for future demand for quality office space in Mainland China and market exposure to trade frictions between the U.S. and China, a lot depends on how entrenched the trade conflict becomes. If the trade war continues to escalate, it will directly affect U.S. and Chinese businesses that produce higher-tariffed goods as exports will be highly exposed. In turn, given this situation, wherever these companies hold office space in Mainland China, there will be a good chance they will not seek to expand their office presence in the country.

Having said this, whether they are U.S. companies operating in Mainland China or Chinese domestic companies, exposed companies are not concentrated in one or a few office markets in Mainland China. They have an office presence across many city markets in first-and second-tier cities. Therefore, from a developer, investor or owner’s perspective, certainly some cities and product types will be impacted more than others, but a worst case scenario of a full blown prolonged trade war will have implications for most if not all Chinese real estate markets, and indeed, will have implications for most U.S. and global markets as well.

LOOKING TO THE FUTURE'

After years of trade liberalization and open markets, the recently imposed tariffs mark a turning point in world trade.

If further tariffs are implemented, they will produce greater business uncertainty, which may eventually find its way to commercial property markets in the form of diminished demand for premium office space in Mainland China and other parts of the world.

Most experts agree that a prolonged trade war would inflict damage to the global economy and therefore should be avoided if at all possible. Chinese and U.S. officials continue to negotiate. It does appear at times that progress is being made but the situation remains very fluid. Cushman & Wakefield will continue to monitor the trade discussions and will continue to provide updates as developments unfold.

This article was first featured in Cushman & Wakefield’s “The Edge: Volume One”. You can find the complete data on this story from the full magazine here.