Urban logistics space is the real estate that serves last mile deliveries in cities. Cushman & Wakefield teamed up with P3 Logistic Parks to develop the Urban Space Model that quantifies demand for urban logistics space based on current and future online sales volumes. The model’s results were highlighted in our Urban Logistics report.

Concerning the interpretation and application of the Urban Space Model’s results feature in the Urban Logistics report, two further points should be added:

By definition, urban logistics serves all “urban” areas, including those that extend beyond city limits. So while London is indeed the largest city in Europe in terms of population, there are other cities on the Continent with large metropolitan areas. To account for this, the Urban Space Model has recalculated estimates for these cities based on their larger urban definitions.1 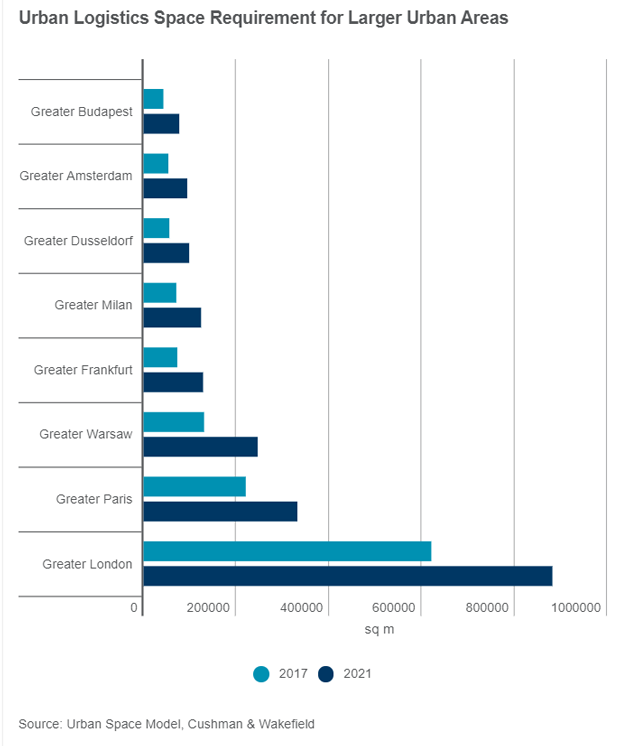 Notwithstanding the revised inputs that have slightly decreased the model’s estimates of required space across all markets including Greater London (see footnote), using larger urban definitions, the model’s outputs highlight a more urgent need for urban logistics space in the markets above. Worth mentioning are the updated results for CEE markets. Warsaw’s current requirement of 129,800 square metres is projected to grow by 90% to 246,200 square feet by 2021. Meanwhile, Budapest’s smaller requirement of 43,200 square feet, is forecast to grow by 76% to 77,000 square metres in 2021.

To the extent that eFulfilment centres can be constructed within a 30 minute drive time to city centres, there is less need to add an urban logistics link to supply chains. Last mile deliveries in smaller cities and towns can be served directly from eFulfilment centres. So while the model may generate an estimate for required square metres of urban logistics space for these smaller, less congested markets, the relevance of this result must be determined on an individual market basis.

Upon request, additional markets have been added to the model with estimates on urban space needs charted below. Excluding Stockholm, Vienna, and Helsinki, these markets are small by comparison to the larger metropolitan areas on the above chart, so the relevance of these estimates will need to be assessed. 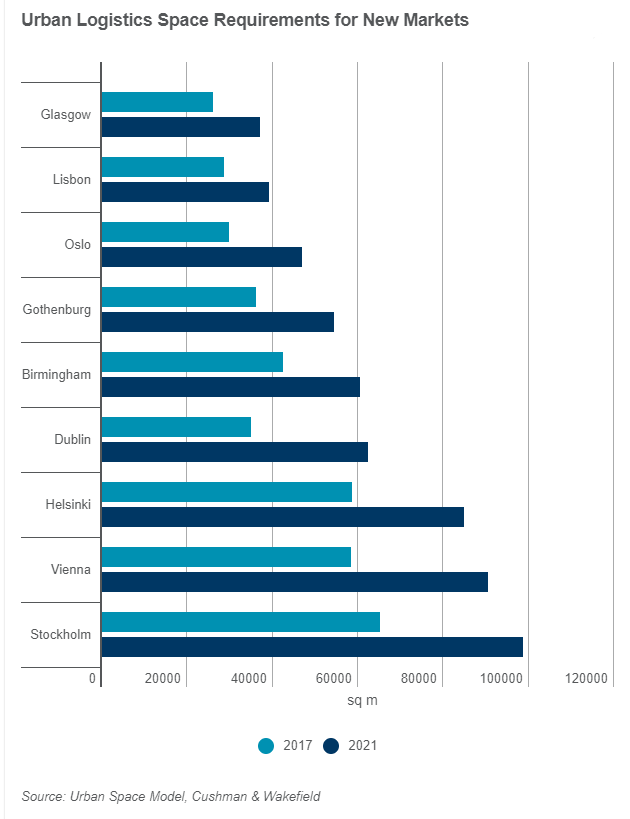 1. Since publishing the Urban Logistics Report, some of the inputs in the Urban Space Model have been revised as per recently released data supplied by the Centre for Retail Research (CRR) on average transaction value per eShopper, average number of transactions per eShoppers, and the number of eShoppers. CRR has updated these figures to 2017 to replace previous 2016 inputs. As a result of this fine tuning, the model’s new outputs for Greater London are slightly lower than those published in the report.↩