Boutique tenants armed with exciting merchandise have been reactivating Korean local business in recent years. These tenants have the power to attract customers by meeting a diverse range of consumer preferences.

Boutique tenants armed with exciting merchandise have been reactivating Korean local business in recent years. These tenants have the power to attract customers by meeting a diverse range of consumer preferences – particularly targeting the millennial audience using multiple social networking mediums in a more skillful and aggressive way. Most of them have less capital than large tenants, but they have creative ideas and are clearly skilled at grasping the consumer needs.

A notable opportunity for these tenants is to set up shop in locations previously eschewed by traditional retailers. Few retail markets, for example, were formed in residential and industrial districts in the past, but now spaces where tenants can run their business are being generated in these locations via change of uses. It is a phenomenon that contrasts with the increasing number of vacancies in large retail areas. However, the sustainability of retail within these non-traditional locations does remain to be seen.


From Boom to Bust in Gyeongnidan-gil

Gyeongnidan-gil of South Korea (Yongsan-gu, Seoul) provides us with a valuable example of this trend. Boutique tenants helped retail locations in industrial and residential areas to grow quickly. However, a rapid rise in rents caused by this growth have slowed the opening of new stores. Because of the rise in rents, there were many cases in which existing stores were being withdrawn from the market due to deteriorating profitability.

For Gyeongnidan-gil to regain the success of earlier years, and for the landlords and the tenants to both be successful, a “win-win” strategy is needed. High levels of fixed rent are favorable to the landlords, but disadvantageous to the tenants; something of which remains as one of Gyeongnidan-gil‘s main problems. Lower rents will be preferred by tenants, but it is obvious that landlords will not want to implement them.


A New Direction Ahead

In the end, the “win-win” strategy could well be in the form of tenants paying a minimum fixed rent, and additionally paying an incentive rent from the result of the sales to the landlord. In this case, having limits set on the tenants’ rent payment levels help prevent them from opting out of their businesses due to exceedingly high and burdensome rent levels.

Ultimately, there is an evolution underway. This evolution includes landlords pivoting from selecting tenants based on the rent payment levels, to selecting tenants whose product or merchandise they most firmly believe in. As comparable buildings within the same area become more sensitive to rent levels, there is a high potential that we will see ever more landlords who invest in tenants with high-quality contents and will ultimately be able to attain a much higher rental income.

For tenants, this form of agreement provides them with the confidence to know that their real estate can grow with them as they do. For investors, it incentivizes them to take a more active interest and supporting role in their tenants’ businesses. It remains to be seen how quickly this model reaches the mainstream, and how transformative it can truly be to boutique retail in locations like Gyeongnidan-gil.

With the office market continuing to face significant challenges as working from home is expected to remain widespread and a rise in retrenchments resulting in a number of firms giving up spaces, many investors are wondering – are office REITs still a viable investment?
19/11/2020

What's Next For Asia Pacific Capital Markets - Spotlight on Tokyo

As Asia Pacific begins to show signs of recovery from COVID-19, led by a rebound originating from China, what is the current status of the commercial real estate market and where is it headed?
Anna Town • 12/11/2020 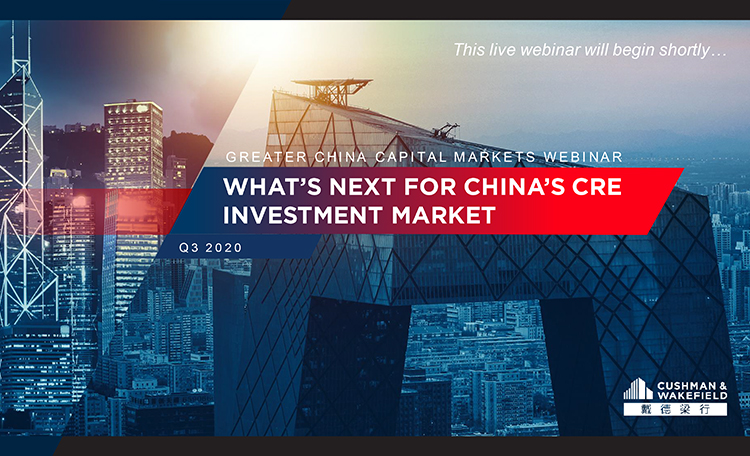 As China gradually recovers from the COVID-19 outbreak, what’s the current status of the country’s commercial real estate (CRE) market and where is it headed?
13/10/2020