Mission Complete? – The Mission Bay Mixed-Use Submarket Gets Its Arena

As a couple of recent articles in the San Francisco Chronicle point out, it’s been a long slog to build out the Mission Bay neighborhood, or submarket as we like to say. In fact, it’s taken some 40 years to reach the point where most of the pieces to the puzzle are in place.

There is medical, education, housing, retail, life science, office and now an arena for our Golden State Warriors and for large concerts and events. Certainly that last part is something this city has oddly been lacking for decades. And the entire area is actually accessible via mass transit, such as it is around here, with Muni light rail and buses plus nearby Caltrain. In fact, in the next year or so (it’s been a moving target for a while now) another light rail Muni line known as the Central Subway will connect the area to Powell Street and Chinatown and right through the next neighborhood soon to be redeveloped—once the lawsuits are cleared up that is—Central SoMa. 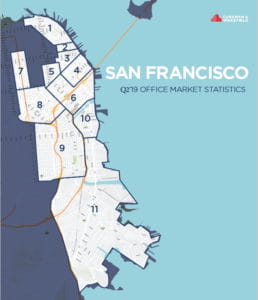 Of course, there have been some changes along the way. Though there are life science operations in Mission Bay, there is much more office than originally planned, for tech companies and others too. In fact, it is the tightest office submarket in San Francisco with what has been a 0.0% vacancy rate for quite some time now. That figure has budged just recently due to around 80,000 square feet (sf) now available at 1800 Owens Street, home to Dropbox. Meanwhile, Uber will soon be opening its headquarters adjacent to the Chase Arena, taking almost 1.0 million square feet (msf) of space, and upping the total Mission Bay submarket inventory from 1.8 msf to 2.8 msf.

There remains one major hole to fill in Mission Bay and that would be the 28 acre Mission Rock site just across McCovey Cove from Oracle Park (home of the San Francisco Giants). This is primarily open parking at the moment. In the future, there is to be housing, office, education, green space and cultural facilities. And though there is no need for planning commission approval for the office, it will still pull from the Prop M allocation with the first phase to be 550,000 sf (total office is expected to be around 1.3 msf). Construction is scheduled to begin in 2020. As an aside, just south of Mission Bay is the Pier 70 redevelopment which will include 1.8 msf of office space eventually.

Amongst all the good articles below, I will point out two that really stand out to me. Both are under Economic News and both are from CITYLAB. They are more analysis than articles really. The first is on the best cities to live regarding salary and cost of living and, needless to say, there’s no place in the Bay Area included there! Actually the top 10 metros are all under a million people. The second is a fascinating analysis on commuting patterns and how, time-wise at least, it hasn’t changed that much in thousands of years.

Have a great weekend everyone and if in San Francisco go check out Mission Bay and the new Chase Arena – it really is a game changer for San Francisco (sorry I couldn’t resist).