The economy is still humming across northern California and, in fact, much of North America at the close of the third quarter. But, as we like to say around here – what’s next?

The NorCal Newsline has not been shy about speaking out on the issues within the Bay Area (that’s the whole idea right?). Those issues include, but are not limited to full employment combined with near zero growth in the labor force, low vacancy and a slow process of building new product which translates into ever higher costs, and a residential development pipeline that is rising, just not at the speed we need nor enough for our low and middle income earners.

There is one area in particular, though, where strides are finally being made: new development, and in particular, new office development. Many of them also mixed-use, thankfully, with residential and retail included. These projects are both big and numerous and found in a variety of cities around our region. However, they do have a few locational elements in common in that they are all within central business districts (CBD) and all transit-oriented. Speaking of which, our Q3 2019 Downtown/TOD map has been completed and you can access it here. 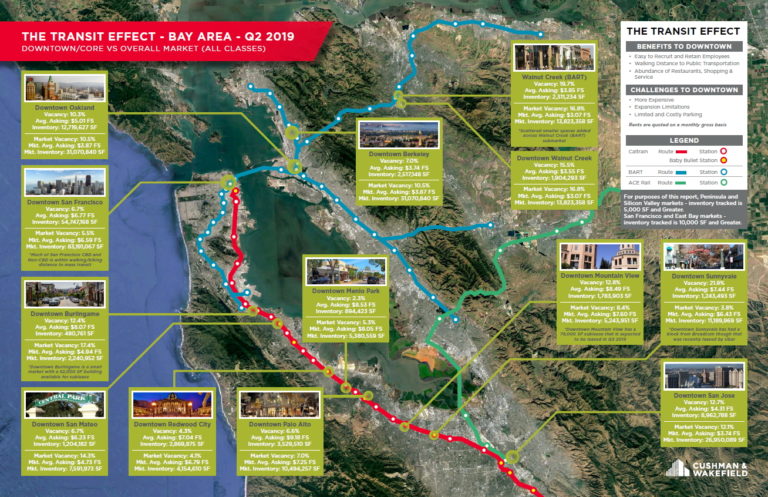 Let’s start in the East Bay. In Oakland, the first new ground-up office project in over a decade delivered in the third quarter and at over 50.0% pre-leased. Totaling just over 600,000 square feet (sf), 601 City Center is just a couple of blocks from the 12th Street/Oakland City Center BART station. Up next will be 1100 Broadway, abutting that same station and delivering its 334,500 sf in 2020 at 100.0% pre-leased. Kaiser Permanente, meanwhile, will relocate 7,200 employees to a new 1.6 million square foot project at 2100 Telegraph Avenue upon completion in 2023 and just two blocks from the 19th Street/Oakland BART station. But wait – there’s more! Just this week, it was announced that groundbreaking for an 875,000 sf, 28-floor office building at 2200 Telegraph Avenue (dubbed Telegraph Tower) will occur in mid-2020. Yet again, this project is a short walk from BART’s 19th Street/Oakland station. What will benefit Oakland greatly is that, in conjunction with these office projects, is a huge boom in multi-family units with over 4,800 delivered since 2017 and almost 9,600 planned or under construction. The increase in “people on the street” has created a surge in new restaurants and bars as well.

On to the South Bay and, specifically, San Jose. As regular readers might note, every week brings an announcement of new development in that CBD. This week is no exception with more details released regarding the much discussed Google San Jose project surrounding Diridon Station. In its formal proposal, Google announced that the goal is to create 6.5 msf of office space, up to 300 hotel rooms, a potential for 5,000 residential units and event center space. According to The Mercury News , Google could employ 25,000 people within the new complex. But as big as that news continues to be, there were two other “big” office projects added to the proposed column within the CBD – one for about 850,000 sf and another for 1.3 msf. Like Oakland, all of these projects are near rail transit, in particular, Diridon Station which is major hub for Caltrain, Amtrak and ACE Rail. Also nearby is the VIA light rail line connecting various parts of Silicon Valley. BART, though delayed, is expected to connect Diridon Station to the rest of its network sometime in the next decade.

I’d be remiss to leave San Francisco out of the discussion. Currently, there are only two projects under construction with availability and both not delivering until at least 2022 –Oceanwide Center at 1.05 msf of and 415 Natoma Street (5M) and its 652,000 sf. Over the past few weeks, there were the entitlements of three major developments within the newly re-zoned Central SoMa area – Phase 1 of Flower Mart (1.4 msf), 88 Bluxome Street (775,000 sf) and Phase 1 of 598 Brannan Street (711,000 sf). Various lawsuits have been settled and these projects can now move forward. Up for city planning approval/entitlement this week is the last major parcel within the Transbay district – 550 Howard Street – a mixed-use project that has already pre-leased its 274,000 sf of office space to Salesforce, headquartered nearby. It’s particularly timely as the okay is likely to come on the same day as another 875,000 sf is added to the Prop M allocation (each 17th of October). That is vital as the availability remaining in the pool had fallen to about 20,000 sf. Down in Mission Bay, meanwhile, a 28-acre site owned by the Port of San Francisco though being developed by the San Francisco Giants and Tishman Speyer, is eager to move forward. New plans released this week call for phase one of Mission Rock to include 550,000 sf of office space. All of these projects mentioned are transit-oriented with Central SoMa soon to have its own Muni light rail line as well as being near Caltrain. The 550 Howard Street project is walking distance to both Muni rail and BART while Mission Rock is near both Muni rail and Caltrain.

And speaking of office development, there could be a change in how office space is approved in San Francisco in 2020. Mayor London Breed announced this week a ballot measure for March of next year that would shake up Proposition M – adding space that had been removed via demolition or conversion since the initial 1986 law was approved, adjusting the small cap up from 49,999 sf to 99,999 sf and prioritizing projects that subsidize certain community uses.

There are changes – lots of changes – coming to Market Street. And I’m not just talking about the San Francisco Municipal Transit Agency’s approval this week of making the stretch through the CBD and beyond much more pedestrian friendly. Retailers are struggling and street life is challenging at best. Yet a major new hotel is planned for a prime site at the same time. We will discuss this topic in more detail soon – for now review the articles below. There will be a test on it all later.

You can find the updated market reports on our website now. 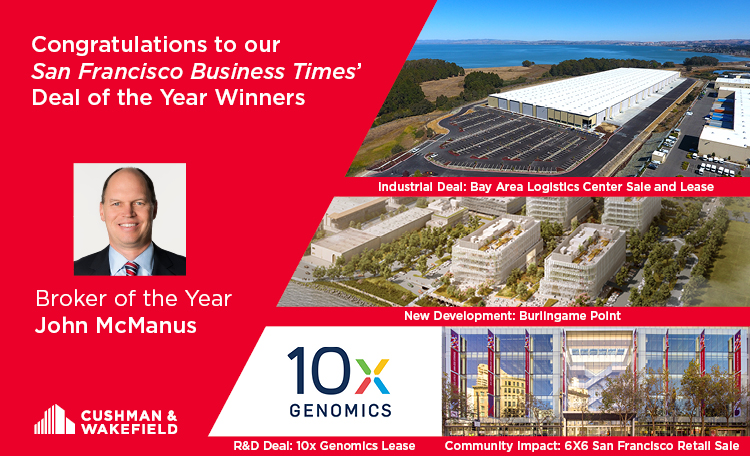 Cushman & Wakefield was the recipient and/or involved in several prestigious awards that were presented by the San Francisco Business Times at its 2021 “virtual” Real Estate Deals of the Year Awards on April 1.