Ronan McNulty, U.S. Army Medical Command discusses his service in the military and shares how that training prepared him for his role at Cushman & Wakefield Phoenix. 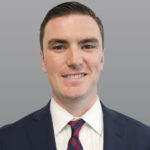 Veterans Day is when I think about service, both military and otherwise. I was in the U.S. Army from 2010-2015, starting at Infantry School in Fort Benning, Georgia, then El Paso, Texas, Silver Spring, Maryland, and a mission in Tokyo.

I served in Medical Command (MEDCOM) at the Walter Reed Army Institute of Research (the same hospital the President attends), researching experimental therapeutics for malaria. I had a different Army experience than most, like wearing a lab coat over my uniform and spending days updating an excel spreadsheet. The military was my first exposure to intense spreadsheet work, and now I work with spreadsheets every day at Cushman & Wakefield. In-depth analysis tools, whether used in malaria research, or charting changes in the market, will always have value. My greatest achievement at Cushman & Wakefield has been training junior researchers and brokers.

During my time in the Army I made some permanent friends. I served alongside some extremely talented scientists as well as enlisted soldiers and Navy corpsmen. I had a pretty plum posting and helped some of my friend move from less desirable positions, which was probably my biggest achievement – besides getting published in Malaria Journal.

This year is my fourth Veterans Day since leaving the Army, and I am happy to be part of the Veterans Group at Cushman & Wakefield, celebrating amongst a community of my professional peers.