Cushman & Wakefield’s Q2 2019 U.S. MarketBeat reports for Office, Industrial and Shopping Centers are out and they are chock-full of data and information. Find out why the theme this time around is “U.S. Economy Powering Through Volatility.”

Of course, there are a plethora of local second quarter MarketBeats too – well over 20 of them just for Northern California thank you very much. Explore those here. 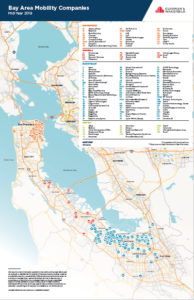 In other news, there are now “at least” 125 mobility companies in the Bay Area and we’ve got an updated mobility map for you. If you haven’t heard, this in one of THE hot tech fields these days with verticals made up of ridesharing, autonomous vehicles, electric vehicles and San Francisco OSan Francisco . Locally, it includes a lot of well-known names including Uber, Lyft, Tesla, Google (of course) along with essentially every major auto manufacturer and dozens of other companies involved with some portion of the application software. Many of the big players are public though many smaller ones remain venture capital-backed.

It’s not cheap here – shocking statement, eh? Under Stories of the Week the San Francisco Chronicle spells out exactly how expensive office space is at mid-year 2019 and that it may get pricier if a measure is added to the ballot and, of course, passes. Not only is office space pricey but so is a place to live and this particular San Francisco ballot proposal ties more office space to affordable housing. Google is moving forward with a plan to build up to 15,000 homes in Silicon Valley which could put a small dent in the crisis. All of the potential new office space and housing will affect the ability to just get around. And BART is attempting to create more transit-oriented housing close to its stations so that there’s less driving and more riding (on its trains). And speaking of transit, the Transbay Transit Center is back open after being shut down for about nine months. Buses are rolling again and you can visit the rooftop park too. I have to say the urban vistas from up there are pretty amazing – go take a look!