Cushman & Wakefield is pleased to announce that Brant Aberg of the firm’s San Diego office has been recognized by the San Diego Business Journal as a Top 40 Business Leader Under Forty for 2019. 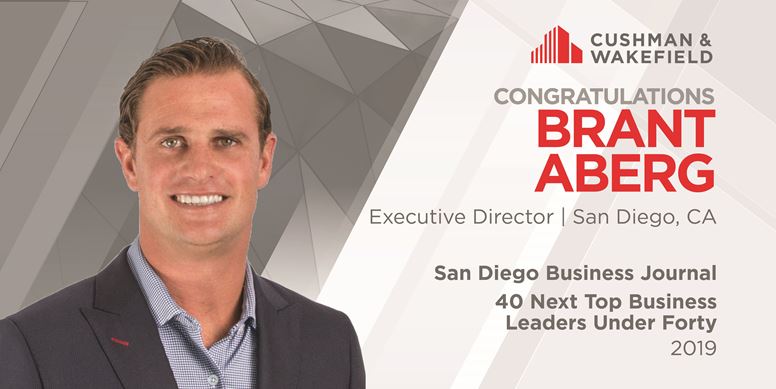 In the first half of 2019 (year-to-date), Brant has already completed 87 transactions encompassing more than 1 million square feet and an estimated value of over $200 million. The inclusion of which represents some of the largest transactions in the county YTD. This comes on the heels of a robust 2018 performance in which Brant completed 175 transactions totaling more than 3.7 million square feet with an estimated value of $330 million. In the most recent 5-calendar-year period (2014-2018), Brant transacted over 1,040 transactions totaling nearly $1.5 billion in consideration, or an average of over 200 deals and $300 million in value per annum.

Brant is an industry-leading services provider who is passionate, committed and loyal to his clients, his team and his colleagues. He has deep experience with both leasing and sales of industrial properties and in working with a full range of industrial assets including but not limited to traditional, repurposed and brand new construction. Brant is also consistently directly involved in some of San Diego’s largest transactions year after year, and works with many of the top owners/developers and companies doing business in San Diego and across Southern California.

Brant’s industry honors and leadership include: Co-leader for the largest industrial brokerage team in San Diego; SIOR Chapter President – 2018; Top producer achievement award from 2011-Present; SDBJ’s Top 25 in their 20’s Award Winner (2013); Costar Power Broker 2008-Present; and Company Rookie of the Year 2008. Brant is also deeply involved in his community, as an active volunteer at the San Diego Food Bank; continued service as an active board member of SIOR for the past three years; member and active roles within NAIOP which has numerous community outreach programs; and a participant of PEERS charity organization which hosts numerous charity outreach programs.

To view more about Brant and all of the winners, CLICK HERE for their September 9-15 print edition. Note, requires subscription to view article.