Banks meeting their Community Reinvestment Act (CRA) requirement through Low-Income Housing Tax Credit (LIHTC) investments have had their fill of challenges over the past few years.

From the Tax Cut and Jobs Act (TCJA) that devalued LIHTC investments, to IRS rule changes enacted at the beginning of this year that burden property operators and residents with no-prior-notice unit inspections, to the regulatory roulette currently in play resulting from the OCC and the FDIC teaming together to propose new CRA rules on one hand, and the Fed proposing their own set of rule changes on the other. The end-result of the mayhem is that fewer LIHTC units get built and communities in need go without.

After the 2016 election, the market for LIHTC investments was disrupted due to investor anticipation of a cut in the corporate tax rate. Such a cut decreases the value of the tax credits flowing from LIHTC investments, and LIHTC investments have been a key tool used by banks to meet their CRA requirement.

Early in 2017, the White House started talking about top corporate tax rates falling to 15%. Some investors didn’t like betting on LIHTCs amid a tax overhaul and they exited the market. Others offered less for LIHTCs or built in forward pricing adjustments as an attempt to hedge their bet in the event tax cuts made their way through Congress and the White House.

The volume of new and rehabbed LIHTC units, which typically averages 90,000 to 95,000 per year, fell at the end of 2016. By March of that year, the market appeared to be pricing in a cut in the highest corporate tax rate from 35% to 25%, which resulted in a decline in the value of LIHTCs of from 12 to 18 percentage points, depending on the investment capital structure. With that pricing adjustment, the market started to stabilize and LIHTC volume appeared to get back on track in the summer of 2017.

As the end of 2017 approached, it was still up in the air as to whether TCJA would become law. Then, on December 22 of that year, the president signed the legislation and the top corporate tax rate was set at 21%, as of January 1, 2018. That resulted in an additional (modest) downward price adjustment to the value of LIHTCs. To help stabilize the market, the March 2018 omnibus appropriations bill provided a 12.5% increase in LIHTC credits for the next four years.

Currently, affordable housing developers struggle with lower equity pricing, as well as rising land and construction costs. There is a substantial delay in reported annual LIHTC project volume of at least two years. Most industry participants feel that LIHTC volume continues in the 90,000 to 95,000 unit-per-annum range, but there is no sense of volume growth in the industry. The still-increasing need for affordable housing throughout the US is well documented and LIHTC equity investments can be an efficient and impactful way for banks to meet their CRA requirement.

In February of 2019 the IRS published final regulations pertaining to the state allocating agencies (each state awards federal tax credits to LIHTC projects within their borders) for LIHTC projects. Little attention was paid by industry participants as the IRS went through the process of developing the regulations and many have expressed concern that the IRS did not fully satisfy the requirements of the Administrative Procedures Act to solicit comments from interested parties before the final regulations were issued. Indeed, the National Council of State Housing Agencies (NCSHA) and its members have petitioned the IRS to dial back the new regulations.

The reasons for concern are the substantially increased burden the regulations, effective as of January 1 of this year, place not just on the allocating agencies, but also property owners, managers and tenants. The new regulations:

Allocating agencies are required to conduct physical inspections and file reviews of a minimum number of LIHTC units when a property is placed in service and not less than once every three years thereafter through the initial fifteen-year tax credit period. Prior to these reg changes, the minimum number of units to be inspected was the lesser of 20% of the number of project units or the number specified in the Reference Chart column below: 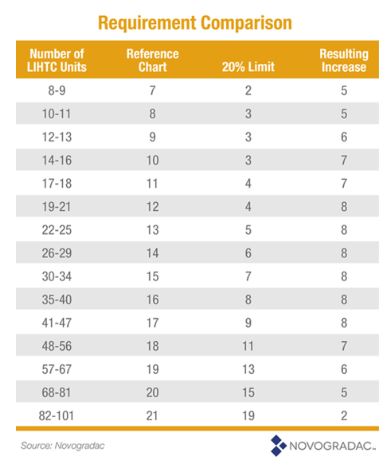 With the new regulations, the 20% minimum is thrown out and the new minimum is the number specified in the Reference Chart column above. For the average LIHTC property, which is 44 units, this results in a nearly 100% increase in the inspection and file review burden for an allocating agency property inspection. Agencies throughout the country are substantially increasing the up-front fees they charge owners/managers for their required compliance monitoring duties. For example, North Carolina will now charge an up-front monitoring fee of $52,800 for a 44-unit property, versus $39,600 pre-reg-change.

In addition, the new regulations reduce the pre-inspection notice period from thirty to fifteen days. This, on top of the fact that owners, managers and tenants will not know which units are to be inspected until the day of the inspection, places what appears to be an unreasonable burden on said owners, managers and tenants; it seems especially disrespectful to the tenants. The IRS states that shorter pre-notice windows will ensure that the allocating agencies are getting a realistic view of the units and files inspected. The difficulties imposed may result in compliance shortfalls.

At the end of January of this year, Joseph Otting, Comptroller of the Currency, got grilled by several Democrats in the House Financial Services Committee about the OCC’s proposed new CRA regulations. The OCC and the FDIC have, together, notably without the cooperation of the Federal Reserve, proposed a new set of CRA regulations intended to de-mystify (i) what counts toward CRA, (ii) how CRA performance is gauged, and (iii) CRA data reporting.

The Fed did not like the proposals, maintaining that oversimplifying CRA performance measurement could lead to banks pouring more investment into larger projects while ignoring the needs of smaller and rural communities. The House Democrats agree with the Fed on this and were not bashful about confronting the Comptroller with their concerns, including their view that the process was moving too fast.

Fed Governor Lael Brainerd has overseen the agency’s just-released set of proposed CRA rule changes. The OCC, the FDIC and the Fed have all publicly stated their desire to come up with one set of rule changes. Comptroller Otting, however, has also expressed his desire to move ahead on his proposals without undue delay.

The OCC oversees all nationally-chartered (typically larger) banks while the FDIC oversees state banks that are not members of the Fed. These banks comprise approximately 85% of all CRA activity. The Fed oversees state-chartered banks that are members of the Fed. This comprises the remaining 15% of CRA activity. If the three regulators can’t agree on rule changes, then CRA rules will vary based on the type of bank making the investment. An additional layer of complexity on top of an already complex web of regulations.

The market for LIHTC investments by banks remains strong, but it could be stronger. A cut in corporate taxes has made investing in LIHTC projects less attractive for banks and an increase in tax credits is a temporary fix that will be gone in two years. Additional regulations just put in place by the IRS and a lack of agreement among bank regulators regarding proposed CRA rule changes do not help the situation.

LIHTC projects are a critical contributor to affordable housing in the US and the government needs to work with industry constituents to develop additional ways to grow this vital resource.

David Risdon is a Senior Managing Director within Cushman & Wakefield’s Special Opportunities Group, which specializes in assisting banks with regulatory compliance monitoring, data validation, data migration and loan portfolio due diligence. He can be reached at david.risdon@cushwake.com. 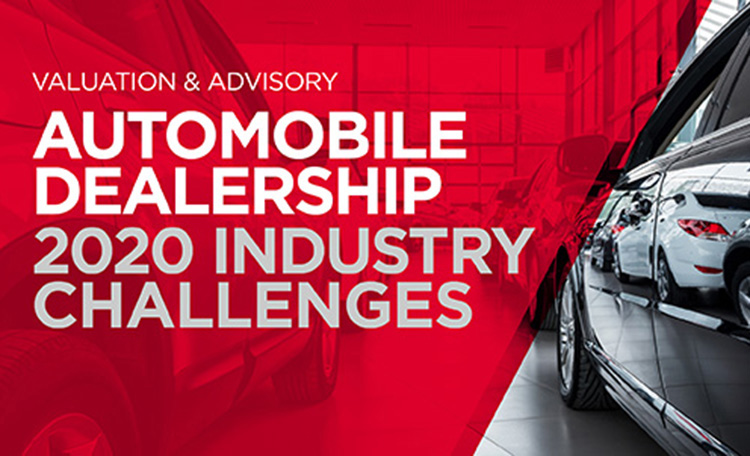 Auto dealerships are probably the least talked about asset class in commercial real estate – and yet, they’re in the early stage of epic disruption—disruption that could potentially upend the entire auto-retail business over time.
Stephen Kay • 1/23/2020 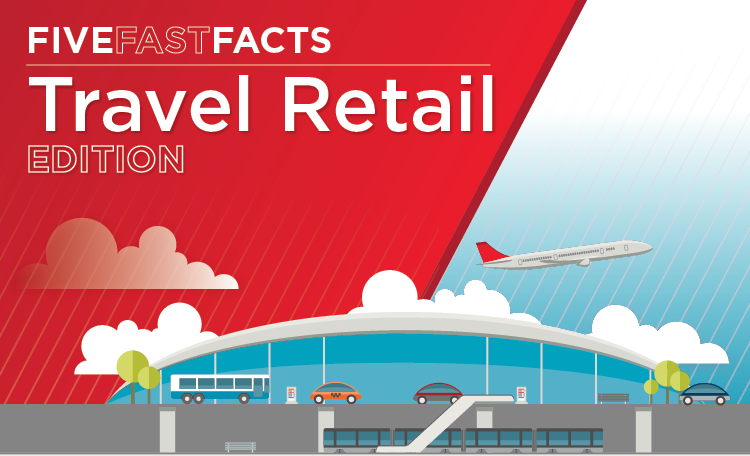 As consumer behavior continues to evolve and security procedures at airports have prolonged dwell times, retailers have recognized an amplified opportunity to reach our nation’s travelers.
Garrick Brown • 11/20/2019 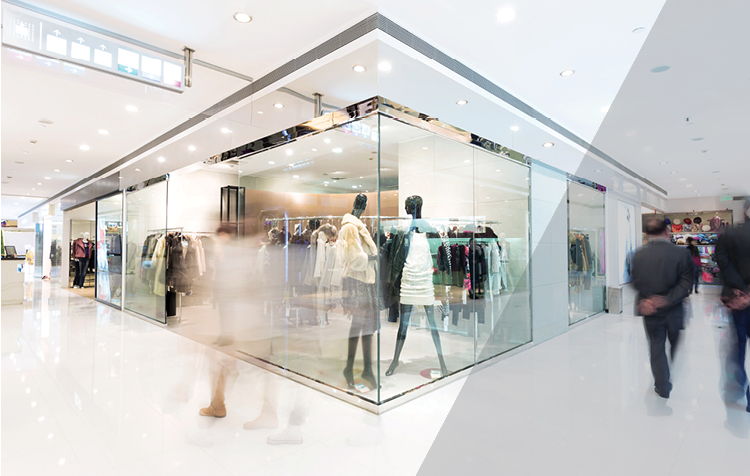 Innovative new retail experiences are appearing across the U.S., and Texas is no exception.
Ching-Ting Wang • 2/26/2020