Right now, the question of the day is “when is the next recession coming?” After all, this expansion became the second longest in U.S. history on May 1.

Long expansions are not the historical norm—in fact, up through World War II, there was about a 50/50 chance in any given year that the U.S. would be in a recession. Since then however, recessions have become less frequent. The expansion from 1961 through 1969 is the second longest expansion in U.S. history—that is, until tomorrow, May 1. The only other expansion that has been longer occurred from 1991 through 2001, lasting exactly 10 years. On July 1, 2019, the current expansion may become the longest in U.S. history.

Context matters for why some expansions last longer than others. One thing is clear: they don’t die of old age. What then might derail this expansion? Recessions usually start after excesses in the economy and/or financial markets develop and some trigger causes the associated bubble to burst. Asset bubbles are caused by unrealistic expectations by a preponderance of investors that cause actual prices to surpass prices supported by underlying fundamentals. Sometimes it’s not even a bubble, but a shock, like in the case of the 1973 recession, which was caused by wild upward swings in oil prices and wage/currency policy decisions. However, economic history is littered with bubbles and shocks, not all of which directly lead to downturns. And while hindsight is 20/20, it is much more difficult to predict exactly where bubbles are forming and what might cause them to pop, let alone when.

So what do we do? Well, there are a variety of indicators that economists, analysts, and markets look to for information and early warning signs about expansions that are nearing their tipping points: the yield curve, stock markets, confidence indices, initial unemployment claims, manufacturing orders, sales, credit spreads, new housing starts, oil and commodity prices, among others.

This spotlight discusses two of the most popular and widely-watched leading indicators to get a sense of what they might be telling us about the outlook for the current expansion. 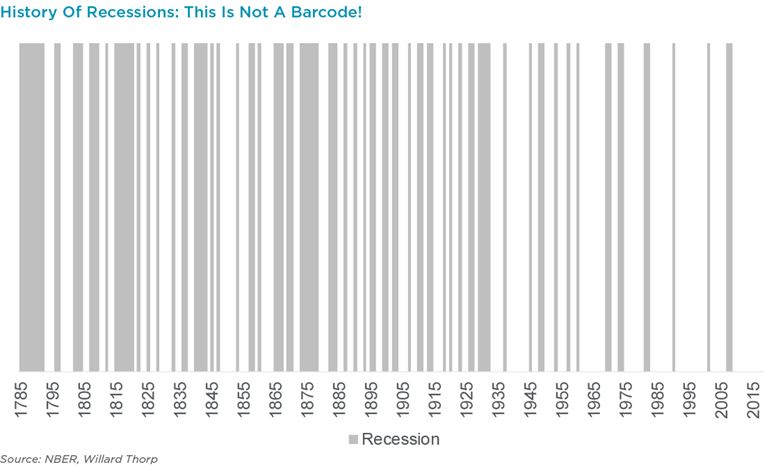 Why does it matter?

Theory states that when the economy is expanding, interest rates rise. Rising interest rates on the short- versus long-end tell us different things. Short-term rates are driven mostly by changes to the federal funds rate. Long-term rates are believed to reflect future prospects for the economy. The difference between short-term rates and long-term rates—the spread—contains a premium for risk and an expectation for future interest rates. The market’s expectation for future interest rates embeds its view of future economic conditions. Earlier on during expansions, long-term rates typically rise with the fed funds rate, but as the cycle matures, movements in longer-term interest rates become decoupled from those in shorter-term rates. When the yield curve inverts, it signals that investors’ prospects about the economy in the near-term are deteriorating—because they anticipate the Fed will eventually dampen inflation and growth through its rate actions—and this causes the quantity demanded of long-term bonds to increase (stabilizing or pressuring those yields). An inverted yield also suppresses credit, and thus growth, because banks typically borrow short and lend long. This is also believed to weigh on economic growth.

What is the lead?

A negative yield curve exists when short-term rates are higher than long term rates (an inverted yield curve) and has historically signaled a recession within six months to two years. 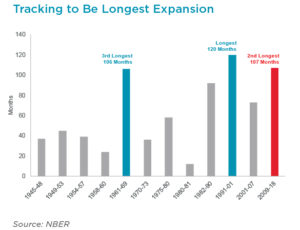 How does it perform?

An inverted yield curve has preceded each of the nine recessions since 1955. Only once—in December 1965—did the yield curve invert for 15 consecutive months without an ensuing recession. This was a ‘false positive’ in the sense that it signaled a downturn which never came (although economic growth did materially slow thereafter). Some have debated whether a low interest rate environment—today’s rates are still low by historical standards—will cause the predictive power of the yield curve to deteriorate. A wide body of literature, including a recent research from the Federal Reserve Bank of San Francisco, suggests that the predictive power of the yield curve is not affected by the level of interest rates. In fact, its predictive performance is largely unaffected by a number of other variables.

What is it telling us now?

The yield curve has been declining recently as short term interest rates have been rising faster than long term rates. The target fed funds rate is now 1.75%. Despite rosier prospects for global economic growth and higher expectations for domestic inflation—due to tight labor market conditions and fiscal stimulus—long-term rates have increased more slowly. The yield curve spread was 124 bps a year ago on April 27, 2017 and was 72 basis points (bps) as of last Friday. While this decline has alarmed some, it’s worth pointing out that the yield curve spread has hovered below 100 bps for long stretches before inverting, let alone before the economy has gone into recession. Before the 2001 recession, the yield curve spread was 100 bps or less for 55 consecutive months. It was not until 11 months before that recession that it turned negative. In the February 1961-December 1969 expansion—the one that the current expansion will overtake tomorrow as second longest—the yield curve was 100 bps or less the entire expansion. During that expansion, the yield curve had its false positive but “correctly” inverted 24 months before the 1969 recession. At present, forecasters expect the yield curve to compress as the FOMC continues to raise interest rates, but most do not expect an inversion any time soon. Some noise in current spreads may also be related to Treasury debt issuance of certain maturities rather than economic fundamentals.

Definition: The stock market broadly refers to all equity markets. The most common indices for business cycle research are the S&P 500 and the Dow Jones Industrial Average (DJIA), but it is possible that others might be used.

Why does it matter?

When worried about a downturn, investors’ risk tolerance falls. Because stock prices embody expectations about future profits discounted to today, when sustained price declines occur, investors might interpret this as a change in expectations about future economic and profit performance. Sellers tend flood the market, and prices fall. Falling stock prices chip away at household wealth and negatively affect consumer spending via the wealth effect. It has been shown that the wealth effect is asymmetric: the negative wealth effect during stock market price declines is larger than the positive effect during periods of appreciation. For those not invested in the stock market, confidence about the future still becomes dimmer. Falling asset prices can also lead to reduced business investment and, for leveraged financial firms, they can lead to fire sales, which exacerbate stock price declines.

What is the lead?

Sustained declines in equity prices tend to lead an economic downturn by less than one year.

How does it perform?

Nobel Laureate Paul Samuelson joked that the stock market has predicted nine of the last five recessions, meaning that this signal tends to flash red when it shouldn’t, at least as a predictor of a downturn. The stock market is known for false positives because stock market corrections—a decline in prices of 10% from the most recent peak—are common. For example, this cycle has seen one of them so far already using S&P 500 daily closing prices. (There were two additional instances of near 10% declines.) A bear market—a sustained drop in stock prices, of 20% or more—is actually a better predictor of a downturn than just a downward movement in stock prices alone, but it’s still not foolproof. Since WWII, seven of the 12 recessions have coincided with a bear market and it is usually not until well into a recession that it is known whether it is a bear market or not. However, all 12 recessions coincided with falling stock prices, and typically those price declines have been sustained in advance of the downturn. Year-over-year declines in the stock prices has typically led recessions by one to two quarters.

What is it telling us now?

Recent stock price volatility is probably telling us a lot more about investors’ reactions to earnings reports and their appetite for unpredictable policy than anything about the business cycle. Investors are also getting the first glimpse into how the tax cuts are impacting this year’s operations and profits. So far in 2018, the S&P 500 has seen two near-corrections: on February 8 and on April 2. Thus, the VIX—a measure of stock price volatility inferred from options prices on the S&P 500—has hit some high points this year (particularly in February, when it exceeded 35). But it has since fallen back below its historical average. At Friday’s close, the VIX was 15.4, below the average since 1990 of 19.3. This index tends to spike in tandem with large movements in stock prices, making its predictive capabilities as lackluster as the stock market’s. And while reported price-to-earnings ratios are high by historical standards—the S&P 500 reported P/E ratio for 17Q4, the latest actual data point available, was 24.3, well above the average since 1945 of 17.7—they are expected to be below that average by the end of 2018. Market estimates of future price-to-earnings ratios imply that corporate earnings will not disappoint.

Witnessing the Longest Cycle Ever

Current estimates of the probability of a recession within the next 12 months are between 0-25%. A majority of forecasters have predictions between 10-15%. Tailwinds from fiscal stimulus and the revival of emerging markets as a global growth engine bode well for the economy in the near-term. Popular leading indicators are not flashing red. It’s more like light orange. The yield curve has the potential to compress further or sit comfortably where it is for some time. Looking at other leading indicators—including confidence, the labor market and manufacturing orders—there is little reason to think that the end of the expansion is in sight.

Footnote: The NBER is the arbiter of U.S. business cycles and uses a broad array of indicators to determine when the economy peaks and when it reaches a trough. Although it is commonly believed that two consecutive quarters of negative real GDP growth signal a recession, the NBER rejects that claim. For example, the Great Recession began in December 2007 and lasted through June 2009. During that period, real GDP declined in the first, third and fourth quarters of 2008 and in the first quarter of 2009. However real GDI declined for all six quarters. NBER states on its website that puts “considerable” weight on real GDP, but also uses data on real income, total employment, industrial production, and real wholesale-retail sales in its determination of business cycle dates. It is usually not until well after a peak or trough occurs that NBER announces its determination.