Lawrence Smith was an enlisted Soldier in the U.S. Army from June 25, 1992 to August 20, 2008, and during that time was promoted six times from the rank of Private to Sergeant First Class. He became a commissioned officer August 21, 2008 and retired Sep 1, 2018. During his time as an officer, he was promoted twice from the rank of Second Lieutenant to Captain. 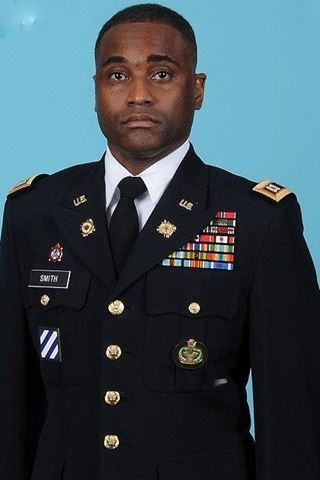 It was around Veteran’s Day last year that I made the decision to retire from my role as a Captain in the U.S. Army and transition into civilian life. After 26 years in the service, it was time for me to make a change – a change that would not be easy. Through the U.S. Army’s program, Soldier for Life Transition Assistance Program (SFL-TAP), I was introduced to Hiring Our Heroes and was enrolled in their Corporate Fellowship Program. During the program’s interview process, Cushman & Wakefield reached out to me for an open fellowship position. I was quickly connected with Frank Stanley, LTC, U.S. Army, Veteran Recruitment & Program Manager for the Veterans Initiative Program at the firm, and this interaction led me to where I am today. Even though I had interviews to complete my fellowship at other companies, I felt Cushman & Wakefield had what I was looking for in going through my transition.

After my three month fellowship at Cushman & Wakefield, I was hired full-time in July 2018. It was an overwhelming experience to start my new career outside of the U.S. Army, especially because this was my very first job outside the service. From day one, everyone was so welcoming and accepting, which really eased my anxiety. Over time, I’ve also realized the management skills I developed as a Captain in the U.S. Army have naturally transferred to my role as an Engineering Supervisor, since I’ve been managing operations and human resources as an Officer for the past 10 years. Now, I am trying to reprogram my brain to think like a civilian, and not like a military officer, and that will come in time. Everyone is afraid of change, but for veterans transitioning, it is all about being ready and open to exploring the new options life has to offer.

The Hiring our Heroes program was incredible, and we are doing everything we can as to spread the word. The program eases your fears of the unknown and is supportive through the transition. I try to be involved and assist veterans in every way I can, and I am looking forward to participating and marching in the New York City Veteran’s Day Parade with my fellow veteran colleagues at Cushman & Wakefield.