In the age of ubiquitous tech startups, the relative importance of a trend is often determined by the level of interest shown by venture capitalists. By that measure, meat substitutes have hit the big time. There was nearly half a billion dollars* invested in 20 different companies focused on meatless “meat” and alternate proteins¹ in the first half of 2019. This was an increase of 41 percent from the second highest six-month period (the first two quarters of 2018). Beyond Meat, one of the largest companies singularly focused on meat alternatives, went public in May 2019 with a single-day “pop” in stock price of $163². Even after some ups and downs throughout 2019, the stock began 2020 up 66 percent from its opening-day price3.

The global meat substitutes market is currently $4.6 billion and is forecasted to grow by 39 percent over the next five years4 (a compound annual growth rate of 6.8 percent). The forecasted near-term U.S. growth rate is even more bullish at 8.1 percent per annum for the next two years5. Total global revenue from meat substitutes in 2018 was a mere 0.9 percent of the overall meat products market ($492 billion) but is expected to grow at nearly twice the rate over the next five years.

This level of opportunity has been a boon for niche companies focused primarily or exclusively on meat alternatives—such as Impossible Foods, Moving Mountains Foods and Beyond Meat. The forecasted growth is also drawing in established food and beverage companies. Nestlé and The Jensen Meat company have both recently purchased brands to produce meat alternatives, Sweet Earth and Before the Butcher, respectively. Other food and beverage giants—including Kraft Heinz (Boca Burger), Kellogg’s (Morning Star), Tyson Food and Hormel Foods (Applegate)—all have plant-based offerings.

What Does it All Mean?

Global beef production has yet to be disrupted by plant- based protein alternatives. In fact, after a decline in 2015, growth has been nearly 2 percent per year with a peak year-over-year increase of 2.5 percent in 20186. However, the industry is entering into new territory with the rise of protein options that do not contain meat but do closely approximate (and even duplicate in some estimations) the meat-eating experience. The question arises, what does it mean if these products do begin to replace traditionally-produced beef?

Changes in food consumption in certain markets can disrupt the food supply chain around the globe. The largest importers of beef cattle all import the equivalent of more than half a million head of cattle per year7:

If habits evolve, the demand for beef cattle could be altered leading to the need for less land in certain parts of the world.

In the U.S., 31 different states have more than a million head of beef cattle in 20198. Cows are the most land-intensive animal protein to farm, requiring 254 square meters per animal (the equivalent of 2,734 square feet or 0.06 of an acre). Utilizing this approximation, there is currently an estimated six million acres of land in the U.S. dedicated to cattle production. More than half of that is in the top eight states: Texas, Nebraska, Kansas, Oklahoma, California, Missouri, South Dakota and Iowa. 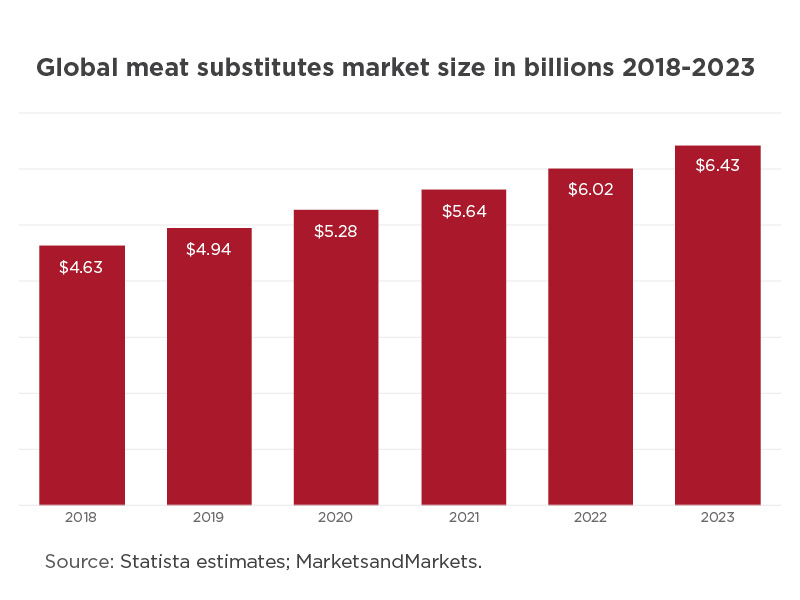 Moving towards meatless “meat” requires a ramping up of different ingredients. The various alternative burgers on the market do not utilize the same building blocks, but the most common protein sources are pea and soy, with mung bean, rice and potato less frequently utilized in the recipes. The primary fat sources are coconut, canola and sunflower oils.

The production of primary protein sources in the U.S. have increased dramatically since the 1990s9. Average annual soybean production is up 63 percent from 2.3 billion bushels (BU) per year in the 1990s to 3.8 billion BUs. Dry pea has increased even more dramatically, almost quadrupling production from 4.2 million hundredweights (CWT) annually in the 1990s to 15.5 million CWTs in the 2010s. The acreage being harvested increased over the same two decades by 29 percent for soybeans and 310 percent for peas.

Demand for both of these crops will impact the north-central part of the U.S. Yellow split peas, which are the specific pea type utilized in pea protein creation, are a cool season crop that grows well in states such as Montana and North Dakota, as well as in Canada. The largest producers of soybeans are in a similar part of the country, led by Illinois, Iowa, Minnesota, North Dakota and Indiana10.

How food gets to the end-user is also dissimilar when protein alternatives are utilized in lieu of traditional meat. Animal protein requires land for breeding and feeding (approximately .06 acre per cow). From there, meat is slaughtered and processed before being moved into the distribution and retail supply chain. Protein alternatives do not require range land or slaughter houses. Instead, the value chain looks more like other processed food production: lab space is required for new product development and manufacturing space is required for production. At that point, the supply chains merge.

The supply chain is an area in need of improvement as the sector matures. As major providers of meatless “meats” have grown rapidly, their provider networks have not been able to keep up with demand. Several restaurant chains recently adding meatless burgers to their menus have sold out in relatively short order.

Food consumption trends are consistently changing. Just look at the post-WWII fall of mutton or the more recent rise of kale. Companies producing protein alternatives that taste and act like real meat are hoping to be the next big trend that changes eating habits for good. Consumers have various motivations that draw them to alternatives to animal meat: improved health, reduced environmental impact or elimination of animal death. If there is little or no sacrifice in the culinary experience, the decision becomes even easier to make. This market will continue to evolve, expanding into new products (e.g., alternatives that taste like chicken, steak, etc.) and the global supply chain will need to adapt, quickly. 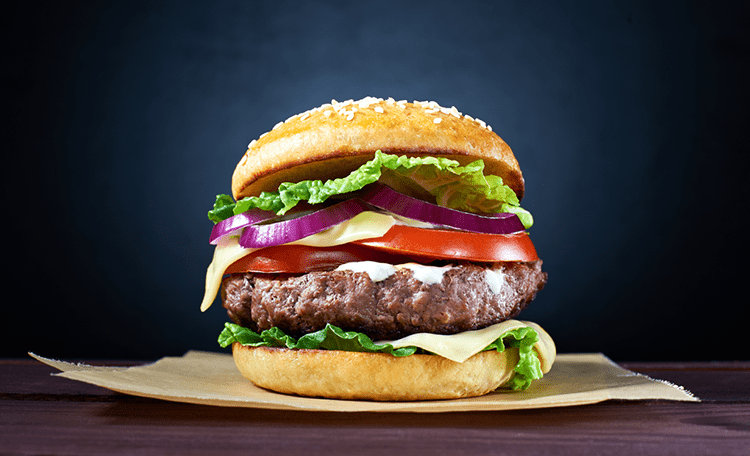 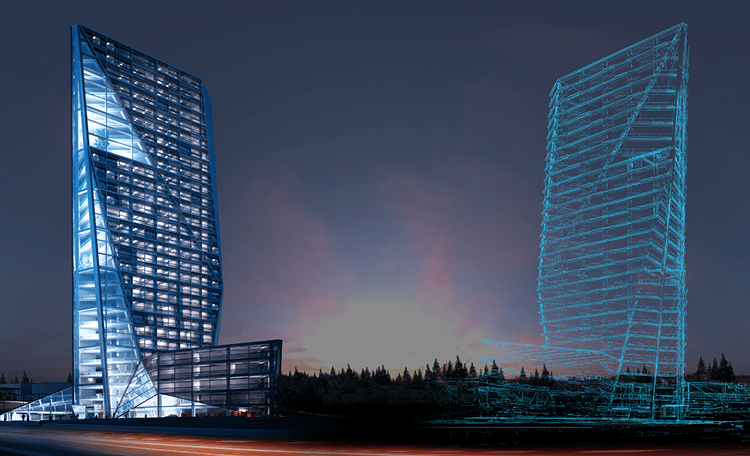 The power of digital twin technology

Digital twin technology is the ultimate technology tool that combines artificial intelligence (AI), the internet of things (IoT), algorithms and other innovations to create a powerful collection of data.
Oliver Skagerlind

Digital ordering has grown 300 percent faster than dine-in traffic since 2014. What can restaurants do to survive?
Garrick Brown